PaJeS and the Jewish News welcomed 200 guests to the Jewish Schools Awards on Wednesday 22nd February 2017 at JW3 in London. The evening began with a canape reception catered by Zest in the restaurant and café area of JW3, followed by the awards ceremony in the Howard Hall. The evening was generously sponsored by Marc and Emma Samuels of the Emmes Foundation and Andrew and Orly Wolfson of the Charles Wolfson Charitable Trust.

In October and November 2016, parents, students and colleagues submitted over 350 nominations for 130 primary and secondary school teachers in four categories. These were whittled down to a shortlist of three finalists per award, who were profiled in the Jewish News and in the Jewish Schools Awards event brochure. A judging panel had the difficult task of selecting the winners, who were announced by each of the award sponsors on the night of the awards ceremony. Our judges included Lord Winston; Sue Williamson, chief executive of the Schools, Students and Teachers Network; Alastair Falk, former head of PaJeS; Karen Harris, managing director of Intu.co.uk and Richard Ferrer, editor of the Jewish News.

The finalists in each category were: 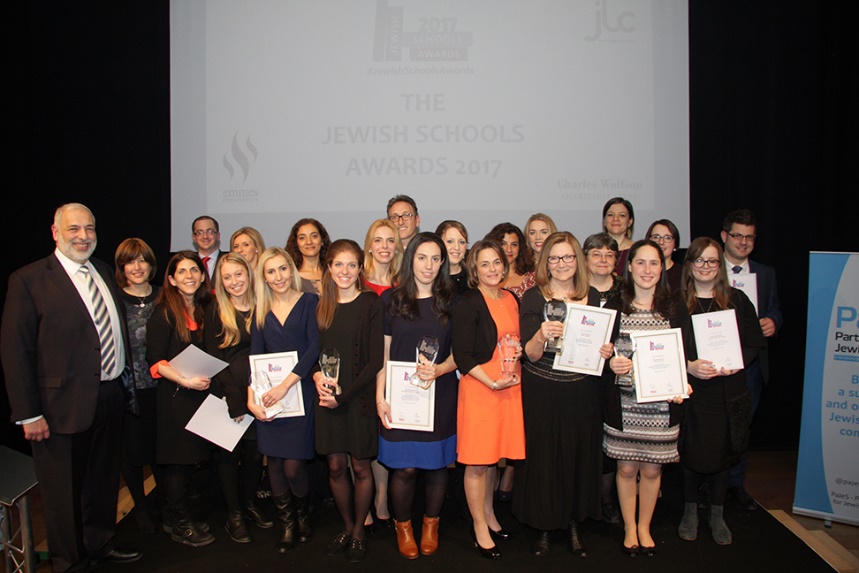 All winners received a certificate and an engraved glass trophy, and £5,000 to fund a school project of their choice.

There was a lot of social media activity before, during and after the Jewish Schools Awards, including PaJeS live-tweeting on the night of the awards and a number of guests Tweeting throughout the evening using the hashtag #jewishschoolsawards2017

The runners up received a small glass paperweight along with signed certificates as well as £1,000 each to fund a school project of their choice.